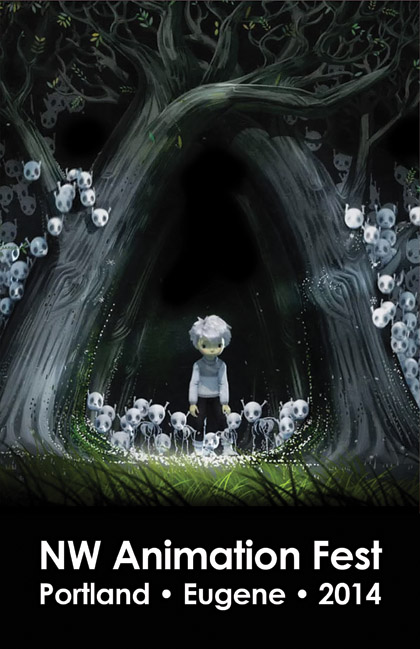 PREMIER AUTOMNE BY CARLOS DE CARVALHO & AUDE DANSET
Two children meet in a magical wood: one a child of summer, the other of winter. This is the tale of Premier Automne by Carlos De Carvalo and Aude Danset. As the film opens, we find ourselves in a world that is both ageless and outside of time, yet witnessed as if for the first time by the eyes of youth. We feel young winter’s eagerness to discover summer, and summer’s fright as a pack of skeletal frost dogs give chase, nipping at her heels. Realizing that the two seasons can never coexist, winter withdraws — but summer follows after him, and there is understanding. We are left with a single tableau that sums up the bittersweet cycle of seasons: the two children playing a game of chase around the tree of life, leaves falling and being reborn as they circle. Premier Automne gives the impression of an instant classic, creating a new legend that feels as if it has been passed down from antiquity. The visual style mimics oil paint on black velvet, with delicate embellishments that remind one of traditional folk art from eastern Europe. This is a superb example of using new, digital tools to reconnect us to mythical mindset. Like poetry, the film’s drama deftly manipulates archetypes and atmosphere, finding original imagery to shape an essential emotional understanding of our world. There is darkness — but passing through it, and nearly being broken in the process, we discover beauty on the other side. An astonishing spectacle that briefly dips into nightmare in order to discover delight and whimsy… A perfect film to represent our goals for the 2014 Northwest Animation Festival!
.
.

THE MAKING OF TCHAIKOVSKY BY JOE CLARKE
Thanks again to Joe Clarke for letting us use a segment from The Making of Tchaikovsky for our festival identification clip before each block. Animation is a strange sort of magic, where the artist trades hours of their actual life for seconds of their characters’ fictional lives on screen. While this is true for all who work in the art form, nothing quite captures the sense of parallel realities like time-lapse footage of stop-motion animators manipulating their puppets. This festival is about animators as people, as well as their films. Screening Clarke’s footage of master animator Barry Purves working on Tchaikovsky – an elegy each night is the perfect way to make this connection between artists and their grand illusions.