Join us at the Eugene Celebration Film Zone for FREE screenings of two special programs: Family Friendly on Aug 24, and Strange Delights on Aug 25. 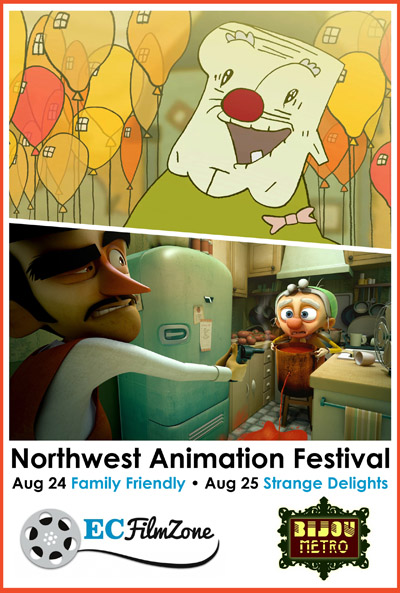 A collection of nine animated shorts that the whole family will love. A snow golem goes on a quest to return a lost baby fire wolf to its parents. A robot reincarnation of Buster Keaton teeters on a ladder at the top of a skyscraper while trying to change a lightbulb. A secret agent battles with a mad scientist who has stolen childrenâ€™s goldfishes to create an undefeatable monster. Program features Thank You from the creators of Cartoon Networkâ€™s hit series Adventure Time. (more)
.
AUG 25 â€¢ NW ANIMATION FEST – STRANGE DELIGHTS

An eclectic mix of favorite films from the festivalâ€™s first three years. Ruby Rocket, the sassy private detective, is about to take on the case of her lifetimeâ€”but first she needs a stiff drink. A strange rabbit-eared creature races against time to give life to his most important and beautiful creation. An aspiring bully accidentally sets off a hilarious chain of events that wrecks the entire world. Includes the short that awn.com named â€œbest animation film of 2013,â€ Marcel, King of Tervuren. (more)
.